A philosophical debate on the use of climate engineering and humanity’s relationship with the Earth.

To be honest, today I don’t even know what to eat.

My mind is in major question-mode. I don’t know the answers to anything.
I just want to have a nourishing meal and focus on writing the last 1,000 words of my essay…

I’ve been on hyper-alert mode for about 2 weeks now (it’s postgraduate deadline time).
I have been researching constantly, from the moment I wake up until the moment I finally get to sleep.
But something about this essay in particular is stirring the right side of my brain.

I’ve studied a fair amount about the world;
Many of its tangible qualities –
From the electrons buzzing through droplets of rain formed around dots of dust floating in pillowed existence across the stratosphere;
To the iron-infused haemoglobin pumping through the veins of complex and interdependent species fighting for survival in the rich and interwoven forests of the Earth;
To the blood that is spilt and cash that is splashed as my own human species battles in mapped and politicized groups to compete for power in the clogs of an outdated socio-economic system….

But today, I am overwhelmed with questions that cannot be answered with rational knowledge alone.

Let’s start with this essay question:

Would the deliberate engineering of the Earth’s climate through solar radiation management, were it implemented, be a sign of human political failure or a triumph of human ingenuity? Why?

So…
Trying to answer this question in a logical way, my brain automatically tries to pick faults with the engineering technique itself;

It will have ecological risks, significant political implications, or maybe there are better ways of managing the climate through carbon reduction efforts.
I can conclude that in my opinion, and in geopolitical terms, climate engineering is too risky to be used as a quick ‘techno-fix’ for climate change.

But that’s where my answer stops.

I’ve written 2,000 words of scratching at the surface, digging at all the obvious flaws, and not really answering the huge depth to this question;

What if humans could engineer the Earth’s climate?

What if climate change didn’t matter anymore, and we could all keep living our high-carbon lifestyles?

What if we could leave it all to the scientists to fix with their incredible technological innovations?

Would the political and economic frameworks facilitating this (putting our ecological position in a complete state of technological dependence) display the greatest and most glorious triumph of humanity’s intellectual and political abilities?

Can humans use logic to fix this problem of climate change?

Can we have it all? Can we continue to grow as a population, and make ceaselessly larger demands on the Earth as the list of material needs for each worthy individual grows, while our planet is physically manipulated into giving it all without any backlash?

Again, we’ve hit a logical wall. We are facing a multitude of serious environmental issues.

I miss the good old days when I used to learn about violent volcanoes in the Jurassic age and earthquakes shaking shopping malls in China (yes, I did spend a great deal of my childhood at the Natural History Museum).
There were no ‘it’s humanity’s fault!’ implications to think about when it came to natural disasters.

Today, we are constantly bombarded with images of a dying planet;
Plastic islands dirtying the oceans, slick oil spills coating delicate snow, the breathtaking speed of glacial retreat, once fertile land now miles of dust, acres of green missing from forests like pieces cut from a puzzle…

It’s a lot for humanity to hold on our shoulders.
Particularly with awareness of the sheer number of souls who bear the brunt of humanity’s disregard for the health of the planet.

But what if there was a similar techno-scientific fix for those problems too?
Let’s say it’s total “Anthropocene” – humans have managed to technologically master their living environment with complete scientific certainty. Even the weather forecasts are accurate!
We’ve patched it up, solved our problems with scientific modernization and political organization, and things can keep going on as they are.

What, then, could I say? Great, I’ll go eat a beef-burger and buy a new car…?

Linking back to my essay question again, what does this show about human ingenuity?

If in a thousand years’ time, we are all consuming decadent foods and jetting around in high-tech vehicles, while plastering up all the tell-tale symptoms with handy mechanical fixes, tell me, how much progress have we made as an intelligent species? How much have we evolved?

No doubt, our culinary and engineering skills would be legendary.
But is that the extent of our legacy?

Do we give all of our ecological problems to Handy Andy, separate and away from our own interactions with our physical world?
Does this separation from the world that we inhabit help or hinder us in evolving as a species?

Or has logic met its limit?

It seems to me, that just like all the questions buzzing around in my head, in answering one problem, the next is exposed.
To accept that science and technology is the only answer to all of our environmental problems, is to accept that there are no more questions about humanity’s relationship with the Earth.

And how could one progress without asking questions?

Lydia Rose is an artist and activist from London. Her art expresses her unique feminine viewpoint and promotes a more compassionate world in harmony with nature. 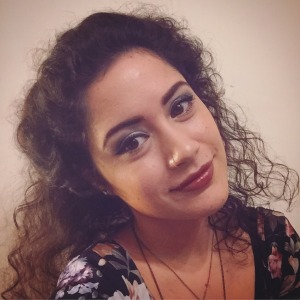